Please indicate below the emails to which you want to send this article: New, Better Banalities. Occupy Wall Street.

I drove back to New York from North Carolina on my birthday weekend to stand with a sign in Zucotti Park. Its symbolic power-of-place alone was enough to get me there and over any aesthetic or philosophical misgivings I might have with Leftist trope, which was definitely laid on pretty thick. But, hey, this is important… Hopefully, something that will crystallize into a popular critique of financial power roughly analogous to the 17th- and 18th-century critiques of political and religious power, critiques that sparked what some historians call the Bourgeois Revolutions— the English, French, and American. For it to be really effective though, it must be popularly understood, capable of strong, perfect platitudes. Platitudes that rightly delegitimize the “earnings” of billionaires as a latter-day form of divine right. Platitudes that understand money as a form of power; rather than as tokens given out for good behavior. Platitudes that understand taxes not as prices or fees but as an active counterbalance to the overconsolidation of financial power. 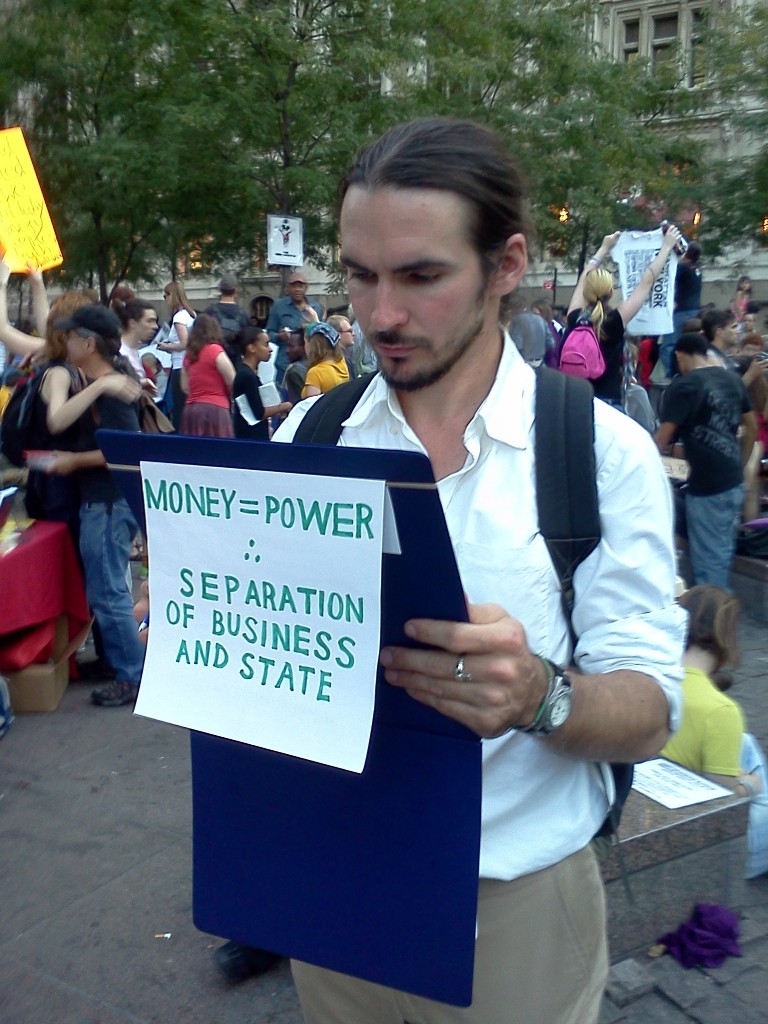 I lifted my platitudes from Jefferson and Montesquieu. On a small sheet of paper, I scribbled: “Money = Power. Separation of Business and State.” Simple enough, but I think the real distillate of the debate. Things need to be written out in terms of power and power-dynamics. For centuries, prior to the 17th century, the West was configured by two primary forms of power: the temporal and the religious. Roughly, the State and the Church. Then, as the story goes, this configuration was radically destabilized by the ascendancy of the mercantile class.  And with their rise— or rather with the cultural responses of Renaissance and Enlightenment humanism— we got these really potent critiques of power that could be wielded by underdogs against abusive clergy and absolute monarchs. Some centuries later, however, and the table’s on the other foot. The dominant members of the mercantile class are now top dogs, running free of most checks or challengers, and making a play for total consolidation. This is why many of us think of Tea Party or Libertarian emphasis against government is misplaced at a time like this: moving power from governmental bodies that we elect and at least theoretically control, to financial entities which we certainly do not. But nevertheless— and this is where I’m pushing an apolitical edge at Zucotti Park— the critique of financial power is or should be a universal concern. To speak of “corruption” or “cronyism” is not a moral assessment, or a problem of any one person, party or percentage. It is a problem of configuration, a collusion of powers. Even billionaires can endorse this call. Some have, as it so happens.

I do not consider Occupy Wall Street a re-invigoration of the Left, or a revolution, and one of my problems with Leftist trope is that it might unnecessarily mobilize all the old political antipathies and quickly turn Zucotti Park into one, big, scripted back-and-forth between Left and Right.

During the course of any discussion or debate, if your dad, or friend, or interlocutor disagrees with you, or misunderstands you, does it ever do any good whatsoever merely to repeat yourself? No. As a matter of rhetorical tactics, you shift your footing. You change phrasing. You try another angle. This does not seem to have occurred to many on the self-identifying Left. Just to hate for a moment:  would it be too much to ask for every new, big manifestation to hatch a different approach, to have its own style and methodology? Why always drum circles? Why always bandanas, red, black, and revolutionary chic? Why vacuous chants like this-is-what-democracy-looks-like? Why always a resuscitation of old forms? 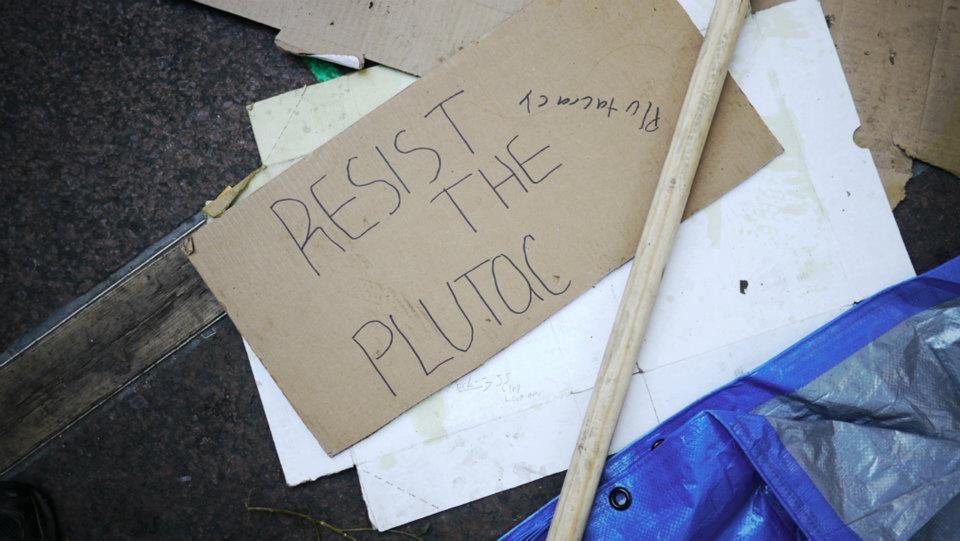 Speaking as a crumbum myself, and someone who is rarely conservative in his thinking, I completely loathe Leftie shtick. Most people do. It’s really annoying— and made all the more so in that Lefties rarely realize how exact and exacting it is as a cultural form, as trope. Imagine if every time you wanted to publicly assemble you had organize in a  Mongolian manner or  lifestyle. If every time you wanted to voice your grievances against a bad law or rate hike, you had to incorporate horseback competitions, yurts and yak’s milk, and throatsinging…. well, okay, that actually sounds pretty decent, but you understand: after a while, it would wear on you. We should always be careful not to sacrifice the Cause for the sake of the Romance.

This is what some of us mean by the banalization of politics.  The pragmatic fragmentation of Parties into proposals. The disavowal of the Party as the political Subject, a subject that can battle, win, lose, fashion an identity, put on lipstick, look sexy or crusty or completely at a loss. But to be totally fair, we cannot really place blame on the overtypical Lefties — who, as Genevieve Belleveau points out, formed a necessary ballast to the occupation. They were there. It is as much the responsibility of everybody to come and contribute to the diversity of words and faces. And, as time rolled on, I maintained a cautious optimism that this was happening. It seemed that, sure enough, Occupy Wall Street does have a large segment successfully evading Party physiognomy, engaging in new-thinking and suit-and-tie subterfuge, and staying on topic with the economic critique and economic reform.

Critiques of economic power are of course nothing new— Marx and early American progressivism being a particularly vigorous ones— but historically speaking there seems to be a new challenge to older centers of power, financial or otherwise. A challenger we might tentatively call the ascendancy of Communicative Power. Communicative power has always existed, just as Financial Power existed prior to the “ascendancy of the mercantile class,” but now we witness its real ever-widening and coming-to-the-fore. Once upon a time, the mercantile class was a specific sector of society; whereas these days, in real terms, we are mostly all higher or lower members of the mercantile class.

And likewise, until the advent of the internet, and a few other gizmos,  far-reaching communicative power came from a rather slender sector of society called the Press, or the Media. It was a sector, rather than a mode, of social being. The savvy were quick to gather that, eventually if not already, communicative power would not have to be translated back into older modes of goods, values and exchange. Telecommunicative means are coming to exist as an end, as an elemental unit of force for communicative power. Which is also to say that one day, maybe soon, we will have to be mindful of the overconsolidation of communicative power as well, of possible monopolies of voice. You probably already sense its beginnings. The internet often feels overly fought-for, fussy, crowded, petulant, and revolving around a currency of attention— of likes, links, views, and pluses which are gaining an autonomous value. This is the early scramble. We just have to keep publicly reminding ourselves of the necessary separation of State, Business, and Media, as spheres of autonomous power-forms.

For the time being, however, communicative power is luckily allied with the underdogs, and for me, expresses the one true commonality between the occupation of Wall Street and the Arab Spring; rather than any similarity of issues or predicament. The occupation of Wall Street is not a revolution, but maybe a radical-yet-gradualist reform, hopefully accelerated by people conversing through glowing screens.

On that note, some points that I either fully endorse, or feel should be addressed:

Almost fully endorse: The Eight demands of the Sovereign People’s  Movement.
(Particularly endorse the structuring of the results; where the most pressing and popular issues create a thin-side of the wedge, that can pass quicker and open the door wider, but the numbers are retained so as not to create a sense of total unanimity.)

Needs more public scrutiny: The Dodd-Frank Act, which was passed to counter the hysterics of Wall Street. We should look closely at its successes, failures, amendments, and circumventions. Here is the Wikipedic explanation here, for a general synopsis.

Seriously considered: Dylan Ratigan’s Get Money Out Amendment, which has been drafted by both Jimmy Williams and by Lawrence Lessig, who  represents as much as anybody, the role of communicative power in the critique of economic plutocracy. In a way, campaign finance reform is the most urgent, in that little progress can be made while we still have purchased elections.

Things that should be considered, right after someone explains them to me: Nicholas Kristof’s suggestions in the New York Times. Again, much of the fight will be nitty-gritties, fought long-term, in terms inaccessible to most of us. This is why those platitudes, those orientations, are necessary when our particular proposals are circumvented by crack-teams of corporate lawyers with magnifying glasses.

Please indicate below the emails to which you want to send this article: New, Better Banalities. Occupy Wall Street.