Please indicate below the emails to which you want to send this article: Cynicism versus Cynicism 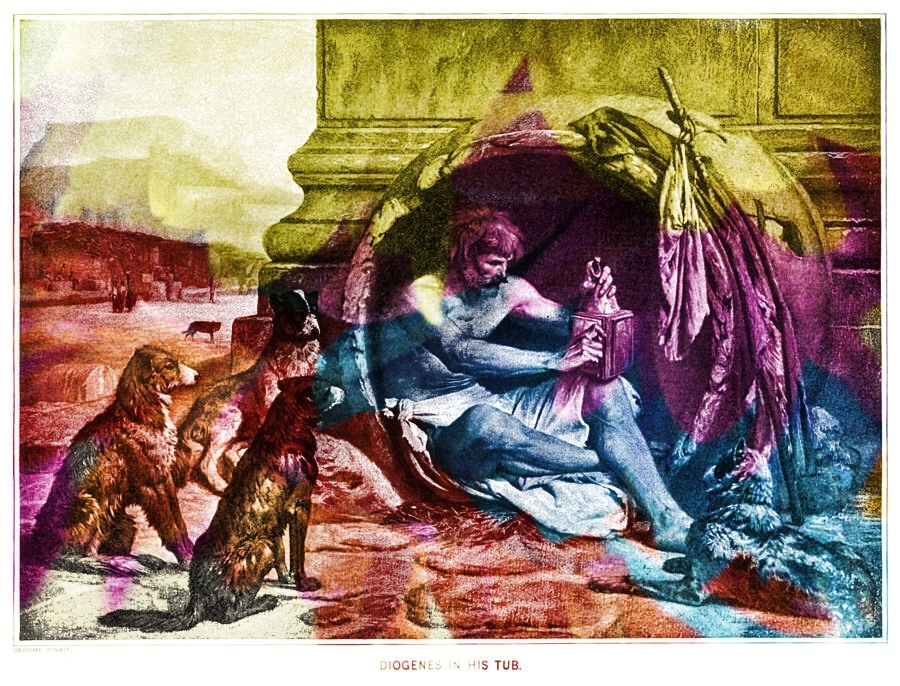 “He used to say that men were wrong for complaining of fortune; for that they ask of the Gods what appear to be good things, not what are really so.”

Cynicism means today the opposite of what it did for the ancient world. The word originally comes from the Greek word for “dog” or “doglike” (κυνικός, kynikos) and aptly described Diogenes of Sinope— Diogenes the Cynic— who lived in a giant ceramic jar or bathtub in the Athenian square, among dogs. Diogenes was engaged in what we could call living critique: critique through a form of life, or life-as-form, in which he “designated his entire life as a performance of philosophy.” His writings have been lost, but his contributions still come down to us in the form of scathing anecdote-snippets that the Greeks called “chreia,” mostly collected by another Diogenes (Laertius), in The Lives and Opinions of Eminent Philosophers. To me, this is just as good if not better. For as far as living critique goes (and any transformation of the everyday), anecdote keeps us focused on the narrative form and microbiographical substance of our lives, rather than on the theory in which words are cheap and deeds rare. I wish chreia or anecdotes were still philosophical currency rather than just context, illustration, and padding.

Philosophy still finds it ways into short-anecdotal forms, but usually in the guise of performance or conceptual art. And Diogenes has, sure enough, already been credited by critics like Thomas McEvilley and Marcia Tucker for being Western Civ’s very first:

“Carrying a lantern in search of an honest man was but one of his repertory of provocative, absurdist acts, which also included walking backwards through the streets, begging alms from statues, gluing shut the pages of a book one by one in the public square, or laughing continuously from a lecture platform rather than addressing the public in normal fashion” (p. 31, Choices: Making Art from Everyday Life)

Diogenes: better than Burden or Acconci, especially since his acts were refreshingly unbuffered and unencumbered by the history and institution of art. Flipping through the lore, you get the sense that Diogenes was kind of an asshole (the funniest kind), an exceedingly principled moralist (put-up-or-shut-up), and maybe even a gutterpunk before the name. But what exactly were the principles behind Diogenean cynicism? In his words, he “opposed confidence to fortune, nature to law, and reason to suffering,” setting flame to human vanity, to all the forms of falsity, social cowardice, and thoughtlessness that drive the human contest. For this reason, living critique was the way to go: no better way to lampoon hypocrisy (as the cleft between action and proclaimed belief) than by bringing belief and action outrageously into unity. I’d take this as the fundamental principle of his cynicism: publicly we all uphold certain beliefs (to the point of platitude) but few actually believe these beliefs when the time comes for real decision; it’s obvious. In public we profess ideals: freedom, integrity, idiosyncrasy, fairness, independence, curiosity, generosity, indifference to money, power, and public opinion. Really though, we’re cowards. We’re small-minded. We admire those who exert power over others more than those who demonstrate power over themselves. We’d take respect over freedom any day of the week. We need approval on every microdecision; in fact, we structure our entire lives around maximizing validation. We shame people who actually uphold our own ideals, and then if savvy, learn to dismiss them as trite.

And why? Why do we do this? Some 2,400 years after Diogenes, we can maybe offer some causes (vestigial pack instincts, whatever), but we certainly got nothing like a reason. These are not “social normative forces” that contribute to social harmony and understanding; they’re mostly pointless and indefensible fears and habits that just tacitly endorse what Hegel called “The Way of the World”— that is, cynicism in the other, contemporary sense of the word. Even amid complete strangers, where we have nothing to gain or lose, it still determines us. Few escape. Alexander the Great, by far the most politically powerful man of his time, once paid a visit to Diogenes and offered him “anything he wished.” Diogenes, duly impressed, said that he wished Alexander would stop blocking his sunlight. Alexander was reported to have said “You know, if I were not Alexander the Great, I think I should like to be Diogenes.” Game recognize game; one form of power to another.

I have this fantasy about a clan of principled gutterpunks, somewhere, in some punkhaus basement, in some train depot, with names like Frank Hallucinations and Amber Alert, fully embracing and aware of Diogenes as their patriarch, carrying out his legacy in contemporary life as a cynical heritage rather than being wastoids. Not much evidence so far among gutterpunks. I have caught glimpses, here and there— occasionally among the indigent: people who, for whatever reason, have fully embraced the strange freedoms of the Pariah. I’ve witnessed a few men and women, around Los Angeles at all hours, who appeared lucid, deliberate, untouched by the schizoid horrors that afflict so many others. They were willfully there, or at least fully accepting, maybe faking, and if not having fun at least taking full advantage of their liberties.

With no social capital to lose, they were free of its entanglements; a form of liberty that few envy and most are happily safe from. “On one occasion he was asked, what was the most excellent thing among men; and he said, ‘Freedom of speech.’” I do envy the power if not the position. It is, of course, something seraphic to be free of the social. To stand proud in CVS in nothing but your boxers and sock feet, carrying a garbage bag full of recyclables. To stroll into Rittenhouse square, and first drink then submerge in the cool waters of the fountain, to the horror of nearby stroller-moms. To scream your thoughts at the top of your lungs. Here they are, still alive, and if they’ve managed to do it all on purpose, you’ve got something closer to a modern day Diogenes. Disappointingly, most of the more purposeful Pariahs however struck me as clownish, but then again maybe this is always the case. “A man said to him [Diogenes] one day, ‘Many people laugh at you.’ ‘But I,’ he replied, ‘am not laughed down.’” The contemporary world is adept at turning any would-be Diogenes into a mere Kook or a Crank; at exiling them from genuine consideration. If my fantasy gutterpunks came along, for example, we’d do the same thing to them.

What would be the best modern approach to living critique?

Please indicate below the emails to which you want to send this article: Cynicism versus Cynicism