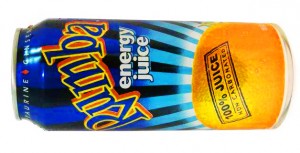 It’s fitting that the first review on Food Spiral would be an energy beverage. Where better than the Food Spiral to transgress the boundaries between Food and Drug? Or, to explore the difference between mere nutrition and true ecstasis? Aren’t we blessed to live in a world where we can purchase a magical elixir for two dollars, drink it with friends in the grit behind a shopping center, by a loading dock and a buzzing highway, and spend the rest of the afternoon wrestling cardboard boxes? Equally, we can read a Great Work, follow it with a canister of radioactive energy fluid, and find ourselves still awake and frothing thirty hours later, on a grassy patch somewhere near our house, in the grips of an Absolute.

This is, after all, what we should mean by the Absolute. These moments of totalization; these seizures of meaning, while walking under a highway overpass. Energy drinks want this to happen for you. They are Muse-inducing. We should feed them to animals.

But there are many energy drinks; many drinks and many differences.The basic combo in any energy beverage is of course taurine and caffeine. But then there are also vitamins, sugars, sugar substitutes, other xanthines, taste, price, color, aroma, acidity… This is all very much a science, to be exploited.

Red Bull for instance— the over-hyped, over-priced energy beverage of the boardroom— should be shunned whenever possible. It was Red Bull that eclipsed my very first, and most beloved energy beverage, Red Devil, a pure and powerful substance discovered in my youth. When a friend of mine showed me its can, with its Marvel-inspired graphic of a devil with spiraling yellow eyes, that was the day everything changed. I can still close my eyes and recall its vaguely vanilla, battery acid aroma… I will never forgive Red Bull for taking her away from me.

Others have, in turn, taken her place. Most notable was the Seven-Eleven energy fountain drink, Wild Stallion. In my early days in Philadelphia, we bought the stuff by the barrel— 99 cent refills on the 2-liter Double Gulp— and spent the days mastering Bill-and-Ted temporal projection and “clutching our kidneys in sublime regret.”

I’ve sipped and enjoyed Rock Star, NOS, Vitamin Water Energy Drinks, but recently fallen for an energy drink that costs me a negligible 70 cents at my local Big Lots Bargain Safari. It’s called Rumba. And with those kind of prices, I can finally skip breakfast, lunch, and dinner. Rumba is stuffed to the lid with all the vitamins you need for “becoming astral,” in the words of Maurice Blanchot. It’s only fair to warn you though: go a little easy on the Vitamin B. I once slammed four whole Rumboids— equal to eight times my daily allowance of niacin— and got an orange rash from sitting in the afternoon Sun… A small price to pay for astrality.

As Food Spiral progresses, or regresses, much space will be devoted to Caffeine and its Kind, and for good reason. It should have a solid place in our founding myths. And when I say “our,” I mean we moderns. We, beneficiaries of this miraculous and inexplicable Good. I can only hope to pen a founding myth— the Xanthiad— worthy of her. And every time I pop the top on a delicious and citrus Rumba energon cube, I beseech her.

Welcome to the Food Spiral Network.
Blick’s: A brief esquisse of my ideal eating establishment